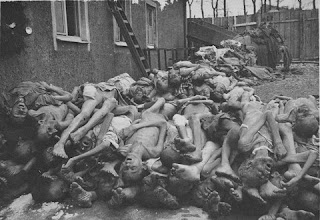 ...“When one man dies, it’s a tragedy. When thousands die, it’s statistics.” - Joseph Stalin
Image from The Nuremberg Pharma Tribunal where the Nazis manufactured the Zyklon B gas used to commit genocide against millions of European Jews in the Holocaust....

Facebook blocked the image and told Facebookers they could choose to look at the image but it was graphic. Which it most certainly was/is. In a sense this illustrates my intent perfectly. (See attached image.)

Most American have no idea what war means. Veterans and certain refugees do. The images are burned into the PTSD soaked minds along with the sounds of guns, planes, exploding bombs and screams of terror.

I wish for people to think about and consider what war means. Who suffers in these wars? Ask someone from Iraq, Syria or Yemen.

No one remains who remembers WW1 or WW2. We can get a sense of it in War Poetry from Homer's Iliad to victims and soldiers of the day. Seems so crass to use the beauty of the language of poetry to describe the pain and gore of war. Cathartic for the composers and instructive for the rest of us.

At this moment John “Bom'em” Bolton, Mike Pompeo and President Trump are rattling swords (or penises??) at Tehran. (Bolton and Dick Cheney are fighting their erections). Analysts tell us that if you thought the war in Iraq was/is horrific, a war with Iran will knock your socks off. Will Israel strike Iran with its (undeclared) nuclear weapons?


How many U.S. Allies will join the fight and how many of Iran's will? How many of you “love the smell of napalm in the morning”?

The Horrors Of War -Gettysburg
Confederate soldier killed by a shell at the battle of Gettysburg, July 3, 1863.

Caroline Hancock was 23 when she served as a nurse after the Battle of Gettysburg, in 1863. She found the smell of the decaying bodies so strong that “she viewed it as an oppressive, malignant force, capable of killing the wounded men who were forced to lie amid the corpses until the medical corps could reach them.” A sickening, overpowering, awful stench announced the presence of the unburied dead upon which the July sun was mercilessly shining and at every step the air grew heavier and fouler until it seemed to possess a palpable horrible density that could be seen and felt and cut with a knife …

“The soldier above all others prays for peace, for it is the soldier who must suffer and bear the deepest wounds and scars of war.” - Douglas MacArthur

too much war. I don't need no more fucking war!